Posted on September 6, 2011 by markherbert 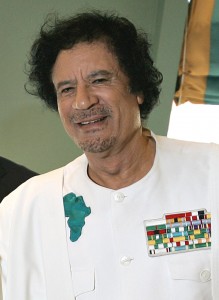 Uncles, grandpas, and dads across the nation hold in the shadowboxes and atticked trunks of America some of the most dangerous weapons ever used in war. Neither their rifles, nor their knives hold that title but the flyers, booklets, and posters promoting both sides of the wars of the past.

Propaganda has always played a key part in wars. It binds populations to a cause. It promotes objectification of the enemy, thereby making them things rather than people, and far easier to kill, conscientiously speaking.

Hitler preferred to distribute transcripts of his speeches. Stalin was fond of cartoons. FDR showed a partiality to the image of Uncle Sam as a personification of America.

More recently, it seems people have developed a phobia of their one time war time pastime. World leaders thought to be utilizing propaganda are vilified as third world despots from a bygone era.

Muammar Qaddafi, recently picking up the tyrannical baton of 21st century dictators dropped by Saddam Hussein, has slimmed, sexied, and sited the propaganda process by being the first dictator to have his own website.

Www.alqathaffi.org has obviously been shut down since the fall of Qaddafi’s regime in mid August of 2011.  Though before that time one could presumably go there for propaganda spiced news, updates, and articles about Libya’s beloved leader.

This unprecedented move into the 21st century opens up thousands of distribution opportunities not previously allowed to a single authoritarian. Qaddafi, while in hiding, also used the internet to transmit messages to a Syrian news network exhorting his forces to “Cleanse the rats (rebels) from Tripoli.”

The internet opens up so many possibilities to the tyrants of tomorrow to stay connected with their supporters and use propaganda to marshal more aid for their causes.

Imagine if Hitler had been able to tweet the hundreds of thousands of Nazi supporters left in Germany at the end of the Second World War. This capability could allow conflicts to continue on a guerrilla scale for months or years longer than they would without direct connection to a leader.

Though conflicts have been generally smallscale in this young century, the availability of the internet changes the entire political propaganda game. Online propaganda makes it nearly impossible to truly defeat an enemy in the hearts and minds of their supporters. It will certainly be a new era for a practice which has followed us since the beginning of human history.

Posted on September 1, 2011 by markherbert

Welcome to onMason. This is your first post. Edit or delete it, then start blogging!